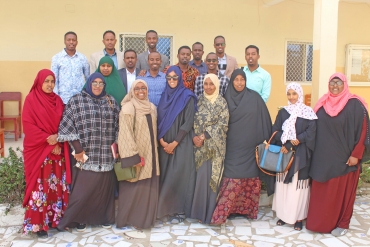 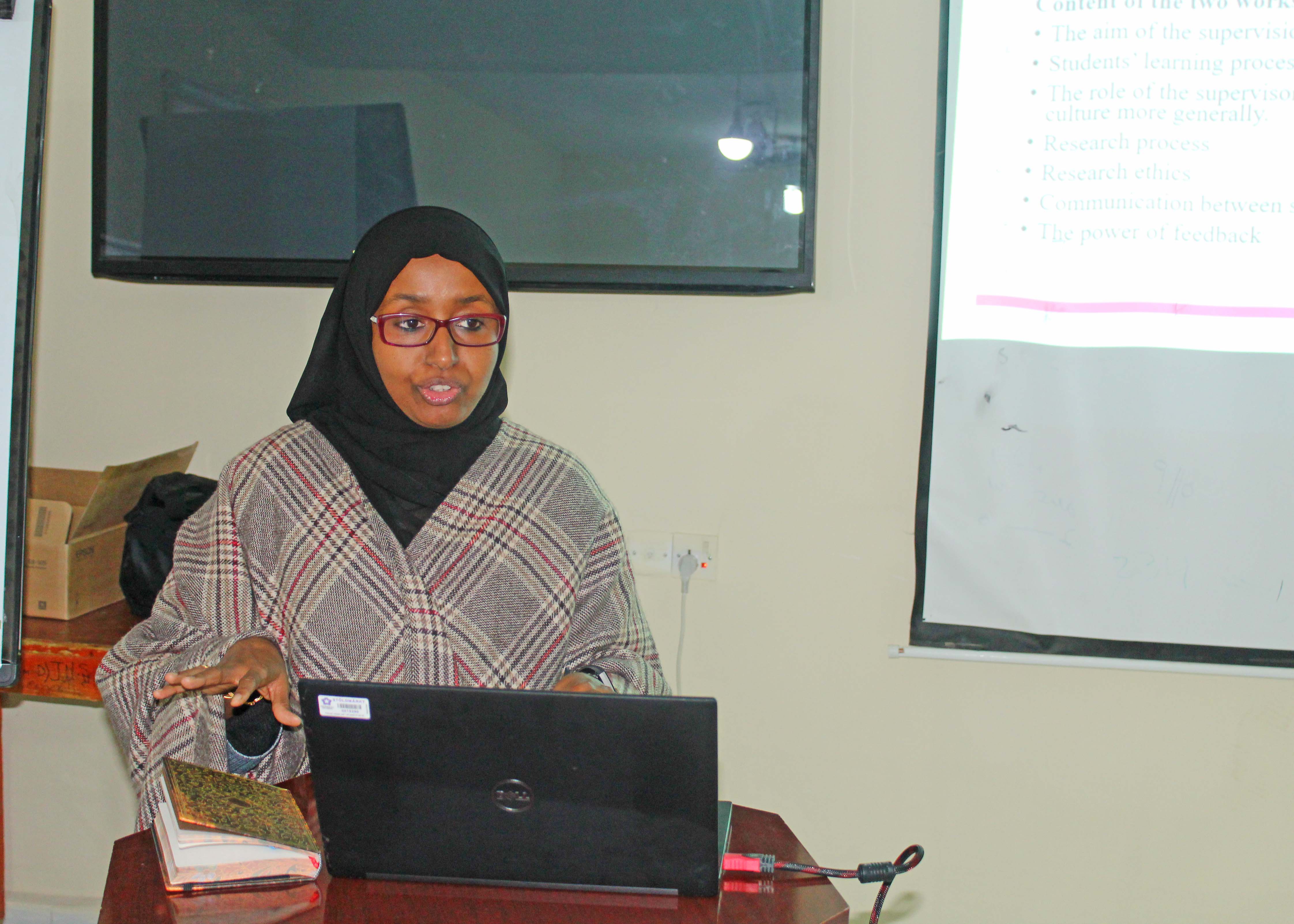 On Sunday, 22 Dec. 2019. 5th Year Medical Students from University of Hargeisa Paid a Visit to Amoud University College of Health Sciences, the students welcomed by their counterpart of 5th year medical students.

The students were taken around the different facilities of the College such as, Dental Skill lab, Clinical Skill lab, Maternal lab, Library and Computer Lab. 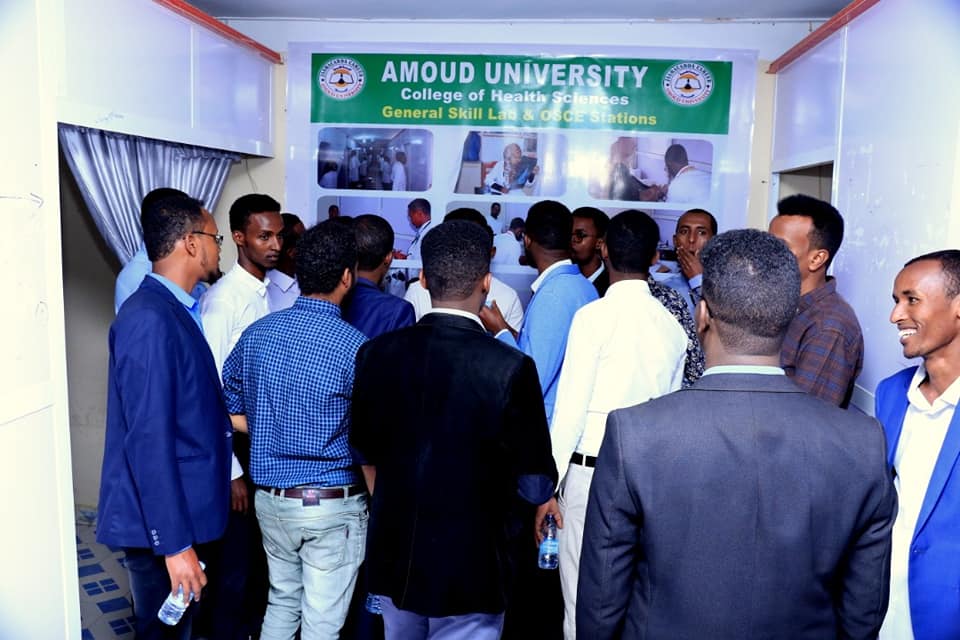 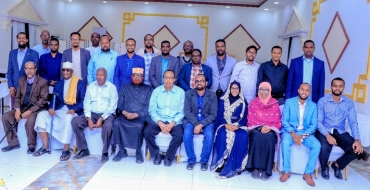 In his opening speech Dr. Walhad appreciated the gesture by Prof. Suleiman to hold a celebratory event in honor of the excellent achievement made by the College of Health Sciences. He thanked all deans of various Schools of the College of Health Sciences of whom most of have been with ACHS since inception of their various schools and had initially to sacrifice lucrative positions elsewhere in Canada, London United Kingdom, and Middle East to come and set camp in Amoud University 10 years or more ago when they did not know whether such sacrifice would pay dividends or not. He appreciated their selflessness, dedication and work ethic together with their various teams and noted that without their input, ACHS would not have made those strides to emerge top of the table in Somaliland as a whole. In addition, Dr. Walhad acknowledged the impact of ACHS in the lives of Somali people from all over horn of Africa region having produced medial experts who are now serving or are going to serve in future in such areas as Somaliland, Somalia and beyond. Everywhere, he said, there are graduates of Amoud University doing what they know how to do best and that is being good medical practitioners.

Dr. Walhad praised the partner institutions especially Kings College London who have helped establish Masters degree in Family Medicine, a programme that has further enhanced the profile of ACHS together with Amoud School of Postgraduate Studies and Research which introduced Master of Public Health and Nutrition that have also further added profile to the graduates of ACHS as they give options for upward progression. He emphasized that ACHS focuses on producing experts with the right Knowledge, Attitude and Practice (KAP). Lastly Dr. Walhad highlighted the importance of ACHS team and urged all members of staff to continue doing their best even in their quest to leave a lasting impact on the local community as they have done before through Community Outreach. He said he is very proud of his students at ACHS who voluntarily donate out of their own pockets a small sum of money to dedicate to the local community, this amount being subsidized by Amoud University and then used in purchase of medical supplies to the visited areas, a fact that has made ACHS to touch the lives of almost every member of the community in Somaliland.

Prof. Mohamed M. Jama "Derie" in his speech congratulated Dr. Walhad and his team at ACHS. He added that he is very confident that Amoud University is not only number one university in Somaliland in medical field alone but also in all other fields including Computing and Information Technology, Education, Agriculture and Environment, Engineering, Business and Public Administration, Economics and Political Science, Shari and Law and that if any fair assessment were to be conducted, he is sure Amoud University would still carry the day. On this note, he urged all other deans of faculties to refocus their energies and rededicate their efforts in improving further their various academic units and emulate the success of their counterparts in ACHS.

Prof. Ahmed A. Boqore also congratulated ACHS for their brilliant work and expressed his confidence that other faculties at Amoud University are also just as well excellent performers and agreed with Prof. Derie that Amoud is definitely on the right path to success all round.

Dr. Fatuma who spoke for and on behalf of all deans at ACHS narrated their path to success as having focused on resource mobilization, thorough training of students, thereby enabling them to come out as excellent medical professionals. She added that this includes activities done by students in the field touching in human lives such as voluntary medical camps, with real pepple in the villages benefiting as students with their supervisors closely monitoring also mutually benefiting through such trainings. Dr. Fatuma said that she's so glad that finally the good work done by ACHS has been recognized by the visiting team which comprised not only local experts but also international experts in medical field thereby authenticating the generally known fact about Amoud CHS being the best medical college in Somaliland and the region. On behalf of all deans at ACHS she gave much thanks to the university management led by Prof. Suleiman for all support offered to ACHS and also for organizing the event, and further to her team for performing an awesome job that is now recognized by everyone for all it's outstanding results.

Prof. Suleiman started his speech by thanking Mr. Ahmed Murud DG, Somaliland Ministry of Education and Higher Studies for finding some time out of his very busy schedule so as to join Amoud fraternity in recognizing the good work done by ACHS and celebrating the big achievement of being Position 1 medical institution in the whole of Somaliland. He said that he was very much elated with the news and that this certainly conforms Amoud University's rightful place in Academic sphere of Somaliland as not only the oldest and most prestigious university in Somaliland but also a centre for excellence in education and scholarship in the horn of Africa. The president emphasized that this is no mean feat considering the level of assessment and calibre of international experts who were involved in the evaluation process thereby ensuring no bias in analysis of all parameters set during their assessment of every institution. The president also took time to congratulate other institutions that performed well such as University of Hargeisa, University of Burco and Edna Adan University and for posting good results in the same assessment. Furthermore he urged Dr. Walhad and his team to work even harder and smarter because "as he famously says, "Whatever way you are doing things, there is always a better way of doing things", and therefore all must continue to strive for perfection, always.

In conclusion, he expressed concern on the very low performance of most other institutions offering medical courses in Somaliland. He decried lack of accountability of such institutions and emphasized that the concerned parties must as a matter of urgency step in and ensure that institutions authorized or accredited to offer such courses must as a matter of necessity follow and maintain the bare minimum benchmark requirements as per set international standards. He urged relevant bodies to take action on mediocre institutions that may bring disrepute to the honorable field of education or teaching in higher level institutions before they impact negatively on future of the aspiring graduates and Somaliland.

Mr. Ahmed Murud issued closing remarks for the event. In his closing speech, he reminisced the advent of medical schools in Somaliland and specifically ACHS from the humble beginnings and said he appreciates how far the institutio has come despite any odds that were on the way. He then gave a brief history and background of plans that are currently being put in place to ensure quality of courses offered by all institutions to the very least are meeting the set minimum standards. He revealed that the ministry of Education and Higher Studies in collaboration with other relevant government bodies are working on establishing a model curriculum to ensure uniformity and standardization. He was also in agreement with Prof. Suleiman that the top four universities namely Amoud University, University of Hargeisa, University of Burao and Edna Adan University have made tremendous strides in ensuring good training of medical experts and congratulated them for a job well done. He also divulged that as a ministry, they are going to follow up on the recommendations of the evaluation team and ensure compliance as much as possible and take appropriate actions where necessary to ensure only the best quality of education is offered to Somaliland students. He closed by saying a big congratulations to ACHS staff, students and the entire Amoud fraternity for a job very well done. 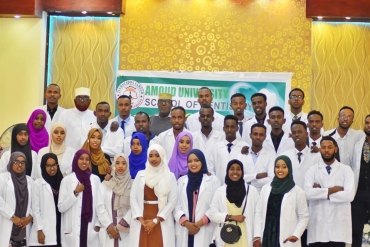 Annual Meeting of School of Dentistry

Clients Say About Us 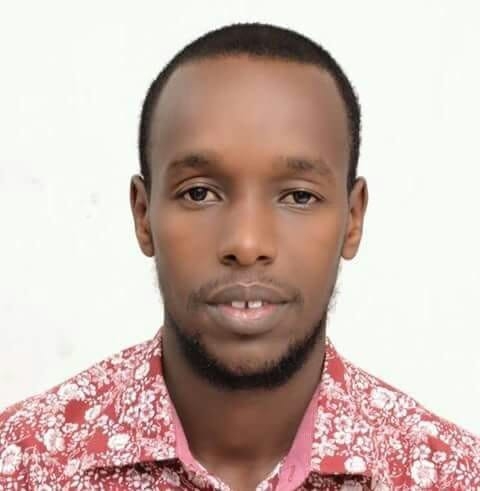 “Macha allah. Amoud university is our character as well as is our identity.” 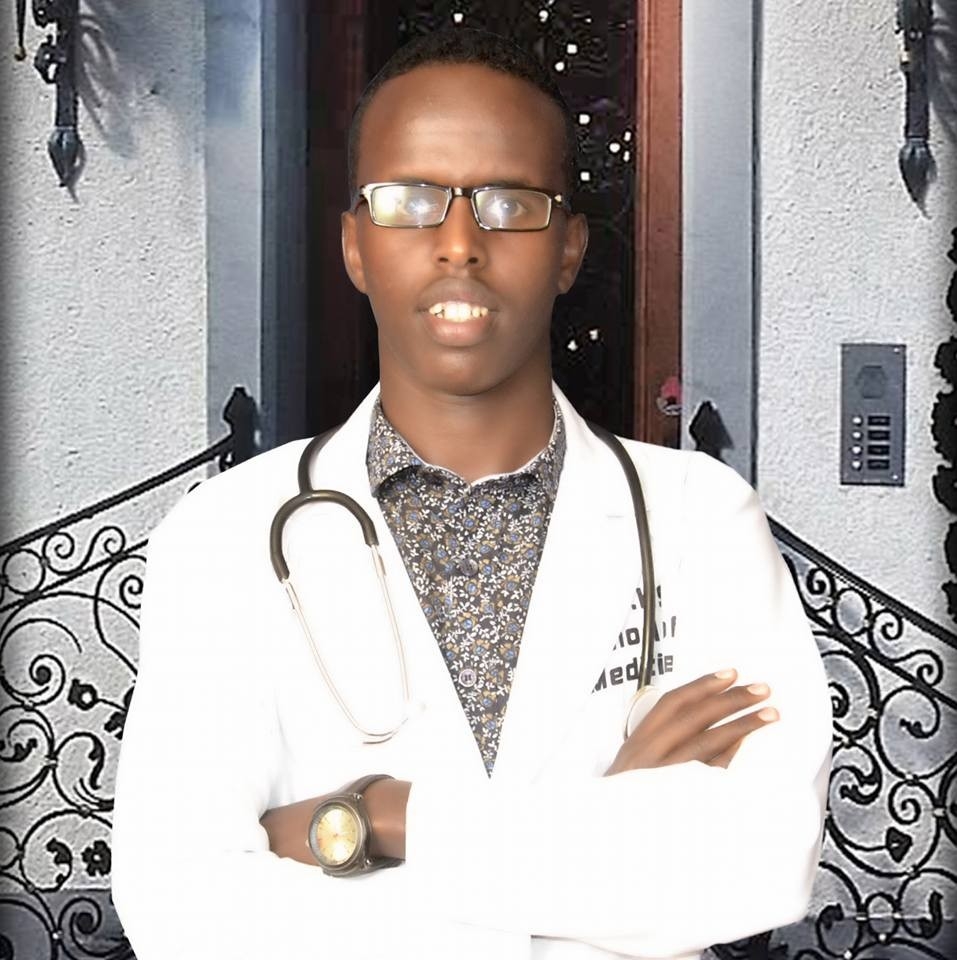 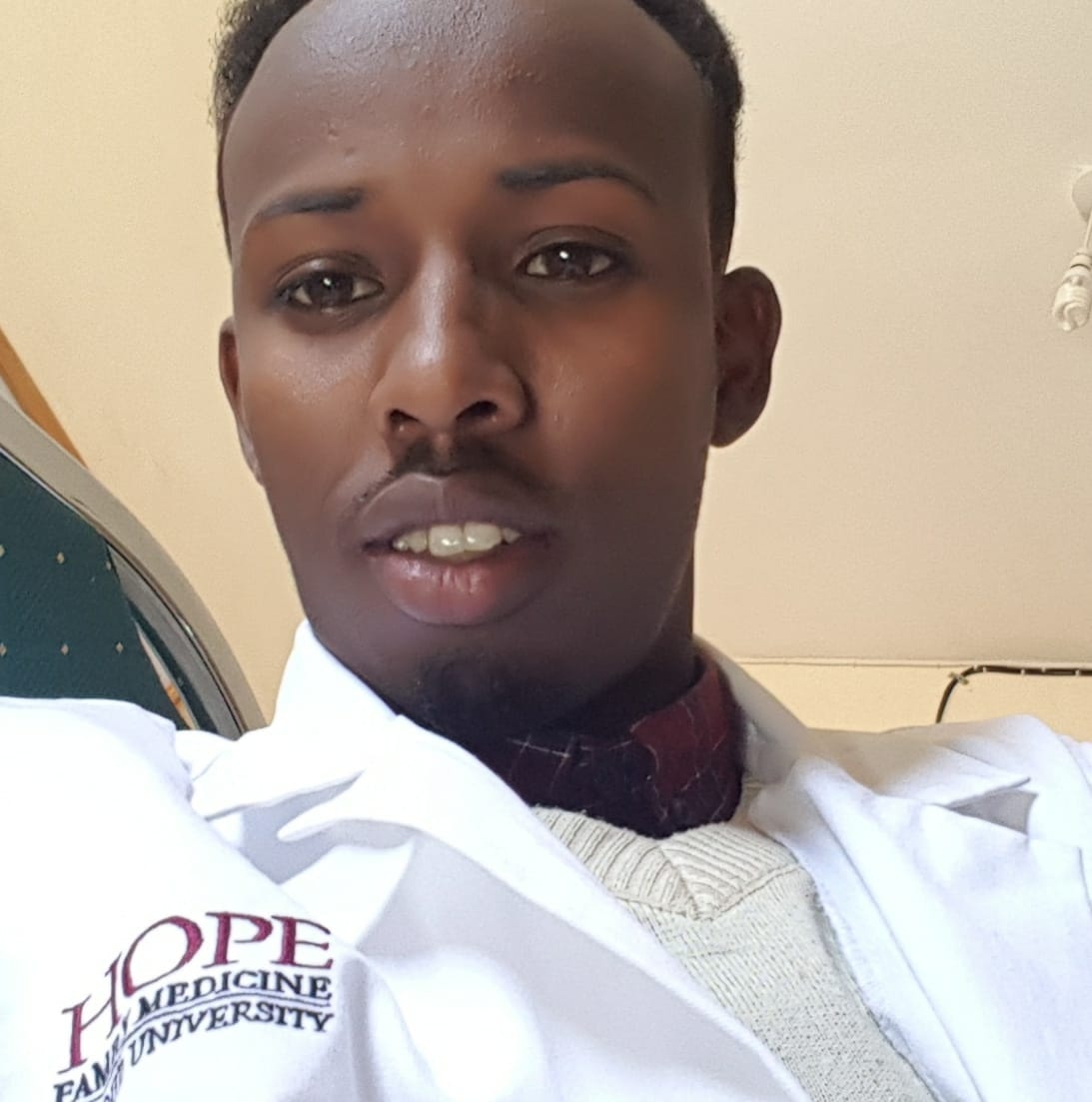 “My brain builder my home.”

Special positions are: stickyPanel, stickyBar, You can use them for any module type. For using this, please go to Module Manager and config your module to your desired position.

You can control module by:

For customize module in special position

E.g. Module Class Suffix: @bullhorn then:
- Class of button is 'fa-bullhorn'. If without @... the default is 'fa-pushpin'